Cleared St. Lucie inlet around 7:15 a.m.   Headed northeast planning to start in 120ft water off the black condo.  Turns out I headed out to about 165 ft before i saw enough weeds to warrant a stop.  Had double peanut dolphin on within 5 minutes of setting up but only boated 1 because I was solo. Trolled a few pre-rigged ballyhoo that I had left over, then switched over to my wax and chin weighted circle hooked rigged ballyhoo.     I lost another nobody home shot, thinking it was weeds and should’ve dropped back on it again but that’s how it goes after seeing the bait in the boat.  Proceeded to troll that area till noon seeing tons of flying fish scared to the surface by predators, birds were also in the area.   Around 11:30 a.m.  hit 2 more dolphin and again only landed one by myself.  Then headed into 80 ft water and got a king in short order followed by a barracuda.  I can’t complain it was a fun day and the waves and wind cooperated for the most part. 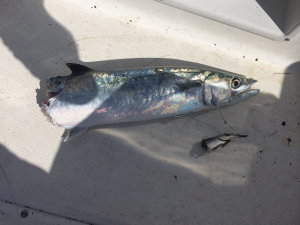 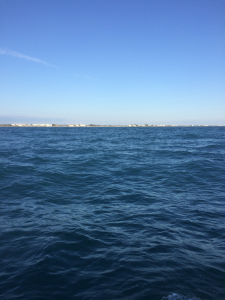 above was taken in the a.m just after clearing inlet. 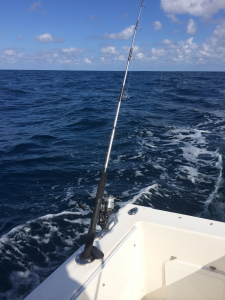 above was taken around noon while I was trolling my ballyhoo, you can see waves were fine, there was a swell but no big deal.