Welcome aboard the REEL BUSY and our St. Lucie Inlet Fishing report. The Mahi Mahi bite shut down last week and the Mahi bites were few and far between. We got lucky and found a few on most of our charters but it was a disappointing week of Mahi fishing overall.

There was a few Blackfin Tuna on Push button Hill but most of them too small to mess with. The gulfstream current slowed to a crawl last week so there’s wasn’t much squid and baitfish being pushed up into the water column which holds the Blackfins on the hill.

There was a few Wahoo bites reported and as the full moon of April approaches the Wahoo bite should improve. It’s a good time of year break out the planner or downrigger while Mahi fishing or high speed trolling for Wahoo.

Most of the Cobia took the week off as well. There was a few caught but it was hit and miss on both the Donaldson Reef and the Sand Pile.

There’s a few Sailfish around and there was a decent Sailfish bite to the south towards Jupiter last week. There wasn’t much going on over the weekend but there was several reports of 3 to 5 releases earlier in the week.

We look forward to getting back out there tomorrow and hope to find a better bite. We’ll see you on the water, Capt. Wayne Brodeur Reel Busy Charters 772-341-6609 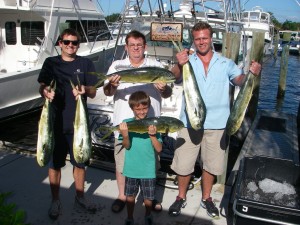